Humans have always attempted to extend their perception abilities to enlarge the workspace of their body, consider for instance the role played by mobile phones for the audio modality. Technologies to touch remote objects have been typically used in robotics for teleoperation but current devices are very far from being portable, cheap or widely used in everyday life. An alternative solution consists of substituting the slave robot with a human operator and the exoskeleton, or other cumbersome haptic interfaces, with a simple and wearable tactile device.

The device in charge of recording tactile perception is not a robot, as it is for teleoperation, but instead, a human avatar with a glove instrumented with force sensors. It is able to collect tactile, along with audio and video, signals used as feedback which is sent to the remote user. The force feedback is presented to the remote user by a simple and wearable tactile display. It consists of two motors and a belt able to deform the fingertip according to the contact force measured by the remote instrumented glove. Note that the force feedback is tactile only and the kinesthetic feedback is missed. Practical experiments have shown that this lack of feedback in force feedback is well compensated by the presence of other modalities like video and audio feedback extensively used in our experimental demonstrations. An important feature of RemoTouch is that the involved technology is low--cost and low--energy consumption, of course this is a consequence of choosing a human avatar which is not a secondary point but the main point of our project.

Regarding teleoperation, note that RemoTouch deals only with the remote perception while the action needed to control the remote avatar is an open and very interesting issue and will be object of future investigations. 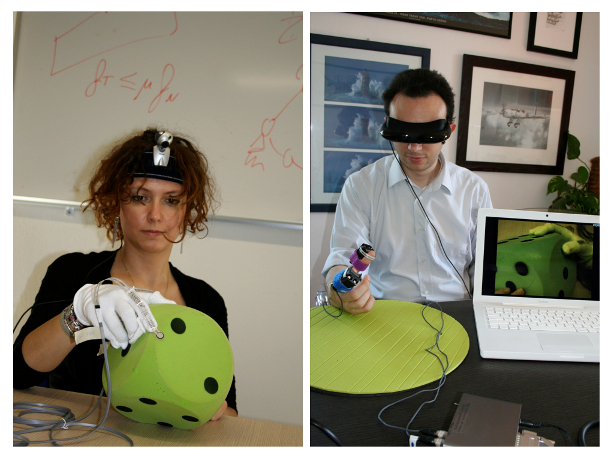 
This work has been partially supported by the European Commission with the Collaborative Project no. 248587, "THE Hand Embodied", within the FP7-ICT-2009-4-2-1 program "Cognitive Systems and Robotics" and by the Fondazione Banca di Monteriggioni.